Skywatch Friday- High up in the sky

There is something about being 30,000 feet up in the air. For some it is scary, but am not one of those. I enjoy travelling and so the mode doesn't really matter as long as it gets me to the destination without too much fuss.  While flying, I love sitting in the window seat and clicking pictures of the sky and clouds.

This time, my friend was kind enough to let me have the window seat during both legs of our journey towards Jaipur and I was happy there. Looking out through the little window, looking at the buildings and the ground slowly disappear can be unnerving for many. Am not the Meg Ryan from French Kiss who is petrified of flying and is chanting all kinds of prayers. I, on the hand freak out with excitement. And when we are finally up in the air, the clouds engulf me, making me feel all warm and fuzzy. I drift into my own world where there is nothing but me and emptiness around.

Here are a few images of the changing scene around us as we flew from Chennai to Delhi and then from Delhi to Jaipur. It was magical to say the least. 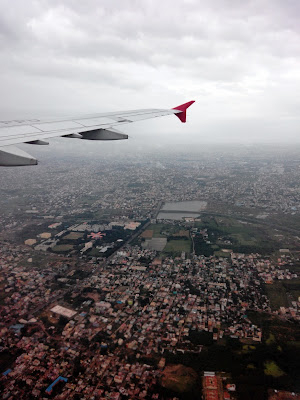 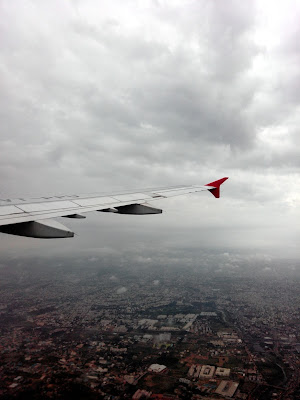 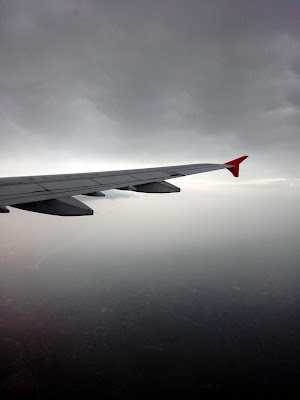 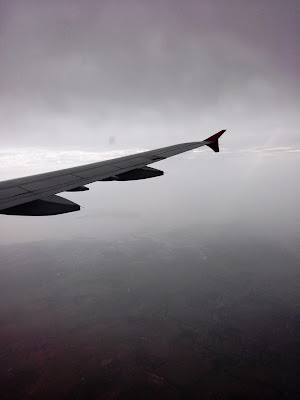 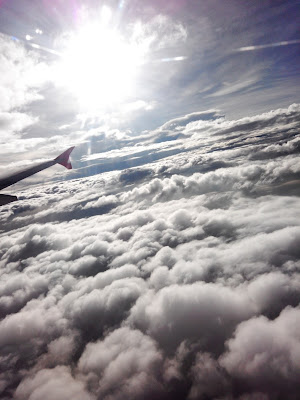 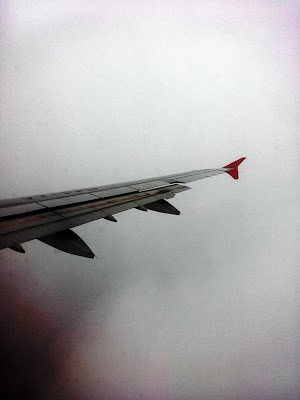 It is only fitting that I resume this series today.. Why? Today marks the 375th birthday of Madras aka Chennai. This image I share was taken during the last weekend walk inside Fort St George.

It was taken at St Mary's Church which is located within the Fort's campus.

The church was built back in 1680 mainly because those who lived inside the fort needed a place of worship. Earlier prayers were held in a random hall in the place. Only on March 25, 1678 did Governor Streynsham Master order work to commence on this church. Apparently it was Our Lady’s Day, which is the reason for the name- St Mary’s Church.

The church is 80 feet long, 50 feet broad and has 3 aisles that are constructed entirely with  brick and stone.
Some interesting facts about the church: There are 104 tombstones, the oldest is that of Lord Pigot from 1777.  The original cemetry is where the  High Court stands today.  During the time when the French tok over the city, many of the slabs were brought over to the church and are found on the floor around the main chapel.  In 1782 when Hyder Ali invaded Madras, these very slabs were used to mount the guns around the Fort.
Even today, prayers and worship happens in this church, though entry is restricted. We were not allowed to enter the premise, not even a few steps inside the gate, so here is an image of the entrance to the Church. 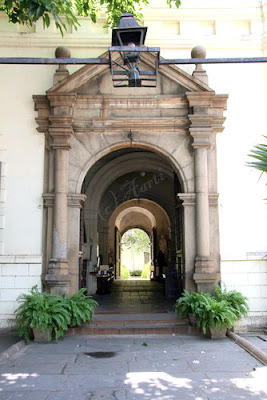 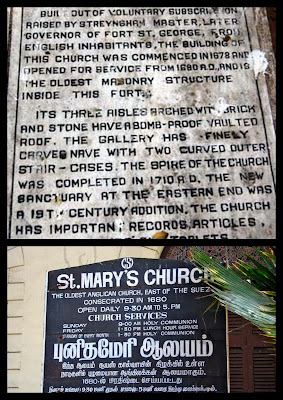 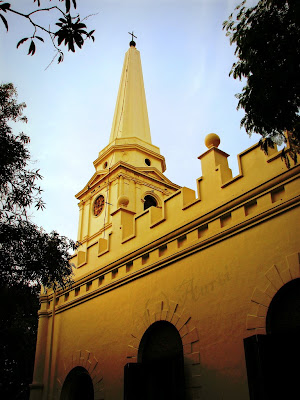 My connection to Madras aka Chennai

Though I was born in this beautiful city called Madras [yes that is what it was called back in the days], I grew up in Coimbatore, Madurai and Tirunelveli before coming back to the city. Dad was with a bank and so we moved around a lot. As mentioned I was born here, so the 1st few months were spent here [though all I know are from what people around me have said] and then I was whisked off to Coimbatore. I was the 1st and only granddaughter on both mom and dad's side and so was quite the spoilt child.

They would come visit us in Coimbatore, or we would go around to Shankagiri or come to Madras. I dont remember much from the early years of my life. What I do remember are the holidays spent in Madras. While we were in madurai, for every school break we would land up in Madras the very next morning. If school shut today, then the evening or night train would see us leave the town and I would return the morning of school reopening. That is how I remember spending most of the school holidays. This continued even after we moved to Tirunelveli.

We would land in Madras the morning, my uncle would be waiting for us at the station, the train used to pull into Egmore Station and cars could come right inside the platform. I would be super excited to see him, and once home I was pampered and spoilt till the day we left. I distinctly remember the front room in my grandparents house [which was my room till a few months ago]. There used to be a bed and a TV there [and a few cupboards, but who cares about them]. My uncle who used to frequent Trichy would bring back a few Coke cans [the imported kind] and they were Rs18 [yes I remember this very clearly]. There would be movies, Tv shows all on VCR tapes waiting for me to attack. I grew up watching A-Team and Different Strokes. I have no idea where my uncles chanced upon these shows but I love them to bits for having done what they did.

Another memory I have of Madras is a not so pleasant one. When my parents moved to Thazhaiyuthu in Tirunelveli, there was time for school and I guess mom was just setting up the house. I was about 5 or 6yrs old. Three months to school I was packed off to Madras to be with my maternal grandparents. I dint enjoy the stay and just wanted to go back to my parents. I guess it was the whole "have you abandoned me" insecurity in a child that had me feeling so.

Apart from home, I would spend a lot of time at a cousin's place. He was a year younger than me, but technically by relation my uncle [mom's cousin bro]. Mom, Me, Aunt and E would go to the beach, go out for ice cream and wander about during my holiday stay. I have spent quite a few nights at E's place, and those were such amazing days.

Once when we had gone to the Marina beach, we kids must have been around 6 or 7yrs old, our moms' warned us not to jump in the water as they had not brought change of clothes. But did we care? we jumped right into the ocean and the return journey home was spent wrapped up in some bedsheets that were in the car. Back then, we used to do plenty of dinner picnics on the Marina beach. Cook food at home, pack them up and the entire family would then drive out, spend time in the beach and have dinner under the stars.

As we grew up E & I have done crazy things quite a few times. Infact our families still tease us for all that we did. Once, we were out with a driver [yes, we have them in our family], and we ended up at this place called Sweet Memories on Mowbray's road. We decided to have pizza, and we had only Rs100. I have no idea how or why, but the bill came up to Rs112. There were no cell phones back then, and so we sent the driver home to bring the balance cash. :-)

It was my uncle's who introduced me to English music [ABBA, Beatles, AC/DC, Billy joel, and just about everyone else] and who got me into the habit of reading. I did not have any stuffed toys or dolls, I only had books for company and I loved em. During a visit, my uncle from USA had come [i hadnt met him too many times and so he was nearly a stranger] and he took me book shopping and they got me hooked on Enid Blyton and The Mystery of 5 find-outers.

Another time, we were just returning from Tirupati, and decided to have dinner outside. Snowfield was a favorite with the family. E & I would get an "Inspiration" or "Fascination"- the ice cream that came in tall tumblers filled with ice creams, jelly, nuts and what not. It would take us forever but we would devour the desserts. An uncle used to order ice cream soda- ice cream floating in a glass of Gold Spot or Campa cola. :-) We were not familiar with aerated drinks or junk food then, it would be breakfast lunch and dinner- one of the meals outside, and it was only with family. Unlike today, where family eat-outs are far and few.

When the day came for us to return to Madurai/Tirunelveli, once again uncle would come to send us off. I remember pressing my face against the train window waving my hands "bye".

We moved back here for good in 1990, and since then I have learnt so much about this city that everyday it amazes me. There is so much happening- so much to see and do that time is never enough~!! [So much so that I began a series on my blog called Celebrating Chennai.. should resume] 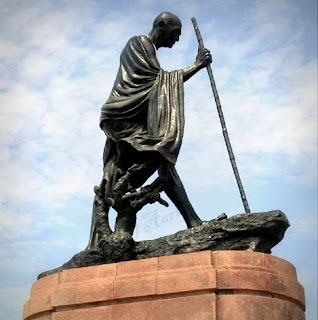 I do love my city
I hate it when people bitch/crib about it
I will defend it
I do agree the heat can get to you, but heck look beyond the heat~!!

It has been a week since I got back from a relaxed break. I spent a good 5days in Kochi with a friend and her family, doing nothing but unwinding.  One evening we headed out to the club but since it was raining, there were shamianas with seats beneath them. But luckily, made another trip to the place with friend another day when the Rain Gods were taking a break, and there was just a gentle drizzle through the 1st half of the day.

The last time I was here, the water was way below this level, and flowed down slowly. But this time, since it was monsoons and crazy rains, the water was brimming to the top and raving ahead, taking with it anything that came in its way. 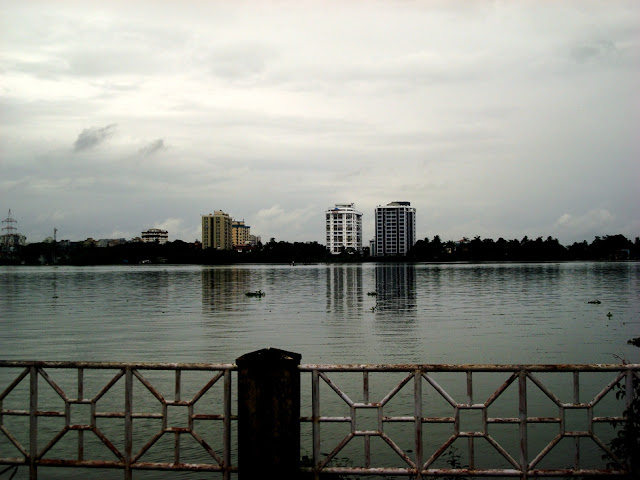 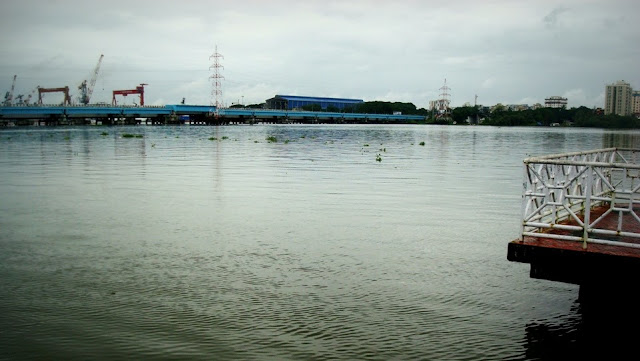 These were taken near the make shift jetty near the Navy Institute.