It is that time of the year again, the day, the Sunday when  Chitra Santhe happens in Bangalore. It is a celebration of every possible form of art you could think of.. It happens just once a year and is quite an event...

Where does it happen? All through Kumara Krupa Road, all the way into Karnataka Chitrakala Parishath (CKP) and beyond [near golf course, Windsor Manor Hotel and Ashoka hotel]

What is so special about Chitra Santhe? The entire street is buzzing with artists and craftsmen showcasing their work. There are a few doing sketches, while others are polishing their brass sculptures while some are giving the finishing touches to their pottery/clay structures. It is an amazing feel to be walking along that street today. This year they are expecting over 2000 artists to participate. 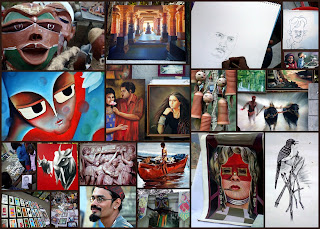 How do i know? Well, i was fortunate to have been in Bangalore during the event and went to check it out with Lakshmi [her mom in law i remember had called and suggested we go for this] .. It was the 1st of its kind that i saw, and i was quite fascinated by the whole concept. Watching the myriad of hues and images floating along the streets, people vying for a good photograph, and other artists more than willing to chat with you. I quite enjoyed the event...

I couldnt believe myself. I was actually there, a place I had been wanting to visit for quite sometime now. This was such an impulse trip, and I was loving every minute of it. Where was I? I was in the temple town of Kumbakonam, more importantly I was standing at the entrance to the infamous temple complex- "Gangai konda Cholapuram"

A man who was watering the plants came over and asked where I was from and what I was doing there.  When I told him I was from Chennai and here just to explore the place, he was quite fascinated. Said he maintained the temple premises, the garden mainly and had been working there for nearly a decade. Asked if I would like to know more about the place and I happily nodded my head. He guided me around the place, sharing information on the history, the ruler, and the various temples within the premises. 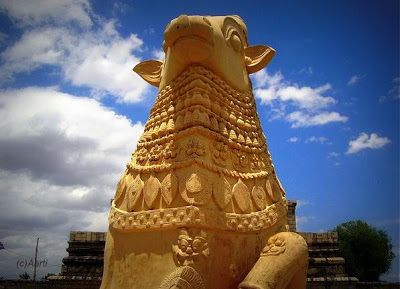 Here is what I learnt,

What was once a city founded by Rajendra Chola is today a rustic village and all that remains is this grandeur [ASI] property. It was founded to commemorate the King's victorious march to the Ganges.  This was also the capital of Chola empire during the 11th Century CE for almost 250 years from then. Emperor Rajendra wore the title of Gangaikonda Cholan when his army captured the Ganges Plains. That is how the place came to be named Gangaikonda Cholapuram.


It’s from here that the Chola empire expanded reaching great heights. They went on to control South India, Sri Lanka, Malaysia & even parts of Indonesia. It is believed that Rajendra Chola’s army brought water from the River Ganges to Gangikonda Cholapuram, filling up the tanks. 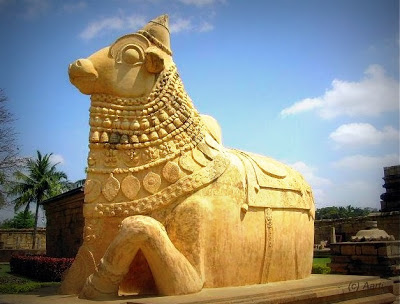 The first thing that catches your eye is the larger than life Nandi (Siva’s Bull) at the entrance of the Maha mandapam. I know that the Nandi stands guard in all such temples, but here it is huge, and then there is a smaller one on the landing above the staircase. The attention to detail, and the intricate carvings on the Nandi are beautiful, you can make our each curve, each bell around its neck and the work on its legs as well.
For more beautiful skies, visit Skywatch Friday

During my visits to Ooty, spending a few hours at the Botanical Garden has become a routine of sorts. This time too i was there with friends, mainly cos it was my friend's 1st time in Ooty and because the gardens provided the kids open space to run and have some fun.

I noticed this peculiar flower during my earlier visits as well. This time, i went up to a lady sitting nearby [who  had a bucket and a broomstick, and looked like someone who took care of the place] and enquired about this flower. She said it was called the Pansy, and dint know any more. They always remind me of Master Shifu from Kung Fu panda. the tiny face, focussed eyes and cute structure i guess.  Here are some shots from the recent visits and finally one from my earlier visit. 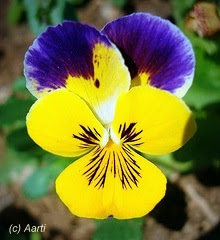 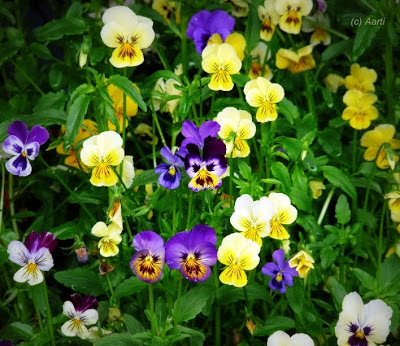 More from Ooty can be seen/read here

While  we were walking around the Baha'i temple, i spotted a tall gopuram not so far off. Pointed it out to mom and within minutes she was asking the guys near the gate what it was and how far it was. We were told it was the ISCKON temple, and less than 5mins away. Called our cabbie and asked him to take us there. Instead of dropping us at the main entrance, he drove ahead to the parking lot. As we made our way to the temple, i saw a lorry load of men hop off yakking away and commenting on the men around. 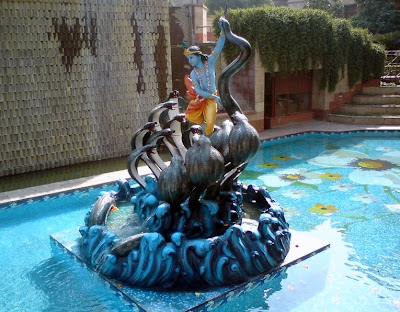 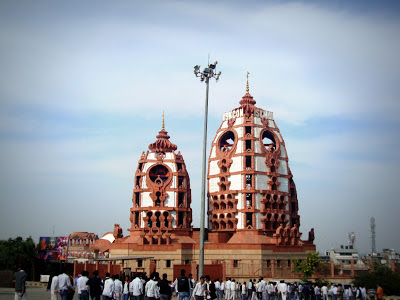 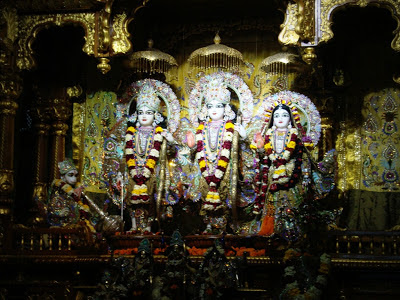 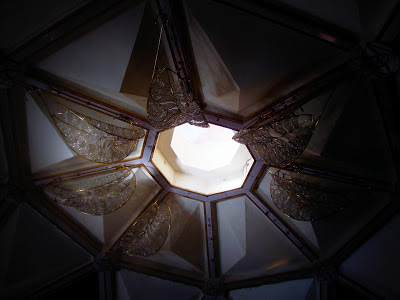 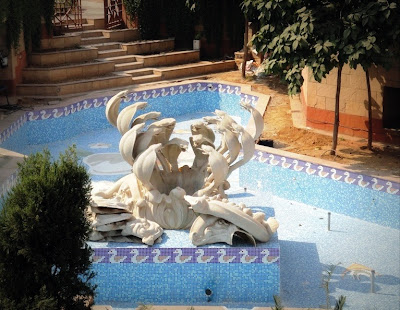 Making our way to the temple amidst a herd of school kids, we managed to sneak in and find an empty spot near the main deity area. There was a group chanting and singing, and another group of people sitting on the right side grooving to the music, well, some of them seemed to be in a trance of sorts. The ceiling had some interesting light fixtures and paintings from Krishna's life. Beyond that were the shrines and the prayer area. The 1st shrine we noticed belonged to Krishna & Radha, on the other side was Rama Sita Lakshmana and Hanuman. We stood around waiting for the aarthi to be done, and then did a quick stroll through the Krishna Museum, the circle around the main shrine. It had paintings of Lord Krishna with Radha, with his consorts, and various other images as well. 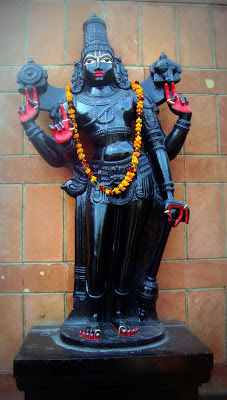 Saying a quick prayer we headed out, received prashad [tasted like flavoured yoghurt+jaggery], explored the place a bit before leaving. Like all ISCKONs and Krishna temples, the place had a book store with the big heavy books, there was also a Govinda- pure veg restaurant near the entry/exit and a giant structure of Lord Krishna in black on either side of the entrance arch. I liked the place, only wish it had been less crowded. Suddenly "Theeratha vilayattu pillai" song popped in my head, I could feel a smile sneaking in, bringing back memories of days when granpa used to sing that song...

I love cars, I also love bikes, older the better... Yep, that is me. So, when Tas Aunty posted about The Redline Automotives Vintage Car Rally, I immediately said yes and was all set to maybe ride in one of them beauties or atleast spend time exploring them. The former dint happen, but atleast the latter did.   All the 5 cars in this rally were restored by legendary racer Mr. Ayub Khan - 2 times National Champion - JK Tyres National Champion. His son,  Feroz Khan, the reigning champion was also part of the rally, driving the car that took him to victory.

Even though there were a few hiccups and delays, we had a good time on Sunday. Avanthi, Deepa & I rode in Aunty's Vitara, we met her to be daughter in law, yapped a bit before heading over to Mahabs to Butterball Bed & Breakfast [belongs to the Gatsby group] wait for the Vintage rally team to arrive. Famished, we dug into food the minute the tables were laid out and no sooner did we hear the rumble tumble of the engines pulling into the parking lots. The cars were beauties, each of them shining bright and standing proudly.

There was a Plymouth Valiant, Pontiac Silver-Streak, 2 Volkswagen Beetles [1 was a bright orange and the other pure white- the beetle instantly reminded me of one of my fav movies- Herbie goes to monte carlo], and a Ford Fairlane. The cars smelt of fresh leather and paint, the steering wheels, the seats, the dashboard,  the rear view mirrors, the door handles, the boot, the name plate- wow, they were etched to perfection. There were also 4 bikes that uncle had restored, but fearing a break down or any damage, they remained home.

An hour or so, a gazillion photographs and a few contended souls then made the way back to the group before heading out to explore the Krishna's Butterball.  It was literally across the road from the B&B, and we spent about an hour wandering the premises, checking out the Thrimurthy caves, taking photographs, and cracking up non stop. We even met 2 people who were exploring South India and were from France. They told us they were headed to spend a week at Auroville, not only visit the sites but also learn a bit of yoga.

A quick cup of tea, and we were back on the road. This time Aunty was with us and the cracking continued. The day ended with a quiet dinner, well, not so quiet considering the number of mosquitoes that kept buzzing around us, amidst an awesome dinner at Crimson Chakra :-)

For photographs, please visit the album