The other day a bunch of us were talking about travel, and the conversation steered towards Kerala. All of us were sharing our experiences to different destinations and finally we all ended up discussing the Padmanabhapuram Palace. Iit is about 50kms from Trivandrum, infact closer to Nagercoil. So, anyways, the meet ended and as I was heading back home, my thoughts lingered in the palace. The first thing that comes to my mind is the trip we took through Dad's office- The India cements when we were in Tirunelveli and the next connect to this palace is of Varusham 16.

Back in the days when we lived in Tirunelveli, we used to do a trip every 6months or so, through dad's office. It was the office picnic of sorts. The very 1st one i remember distinctly was to Thiruparappu falls and areas around it. The next time it was Trivandrum- the Palace, manimuthar falls, papanasam, mundanthurai and places around. These weere fun mainly cos there was another family we were quite close to and they would also be travelling with us. I was the only kid [yes, this was way before my sister came into this world and the other family had their son] 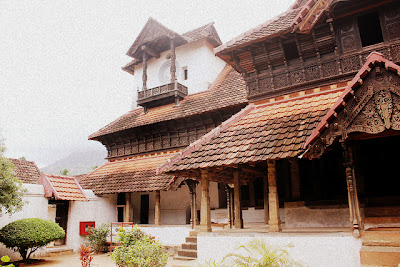 Ok, coming back to the office picnic trips, the bus drew to a halt outside the Padmanabhapuram Palace, and we were all told to hop out, explore and be back within 2-3 hours. I wondered "Wow, what is there in this old place that is going to take us that long to explore?" Boy, was I wrong! It was magical, and for a kid who has never seen a palace of any kind, this house was palatial to say the least. So many rooms, and each one inter connected, narrow pathways, the beautiful wooden frames running through the exterior of the house, a huge hall with seats all around [resembling a royal durbar] called manthrasala, but the one thing  that had me zapped were the teeny tiny entrances and staircases. 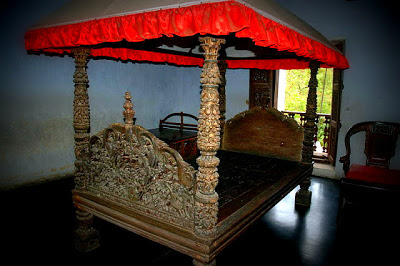 The entrance of this palace is called as Poomukham, which leads to an ancient door of palace.  There was a brass lamp with a knight on a horse hanging there. Another aspect that I remember [thanks to a recent visit to the palace] is the Thai Kottaram with the Kannithoonu (a pillar made with wood from jackfruit tree with beautiful intricate floral designs). Rumour has it there is a tunnel connecting the Thaikottaram with Charottukkottaram, and it was used extensively during days of war.

No the steps were tiny, it was the archways and entrances that were small. It was almost like the people who lived here were no taller than 3 ft in height[you beg to differ?]. The staircases were almost vertical, a straight climb upwards. Sheesh, it was nightmarish, especially since I was tall, even back then [all of 11yrs old studying in 6th std]. I was fascinated with the walls and all the paintings on it [made using vegetable dye]. And then there was the majestic King size bed- a wooden cot made up of 64 different pieces of wood which are of medicinal quality. The Queen's dressing room nearby had a another cot, except this was made of stone. 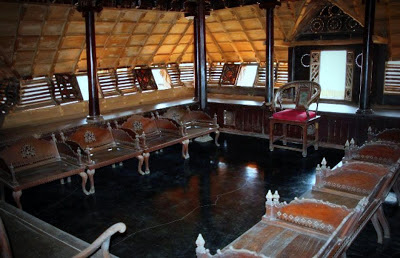 As we finally made our way downstairs out to the garden, I spotted the mandapam[resembling a temple hall]. If you've seen Varusham 16, you will know what I am talking about. Called the Navarathri Mandapam, all the pillars here are made with stones and it is the only place in the palace made of stones. This place was used for cultural performances only and audience were members of the Royal family only, outsiders were not allowed.  There is also a clock tower within the palace grounds which is over 300yrs old, but still works perfect. 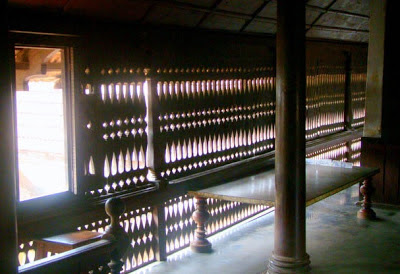 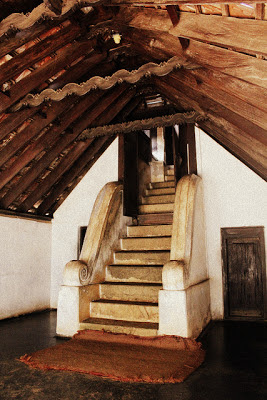 I would love to do another trip and explore the palace some more. Am sure I would notice things I dint the last time around...

These photographs were taken on dad's old film camera and edited wee bit... Wish there were more, wish I had been more interested in photography/travel back then.. But then heck, I aint complaining!! :)