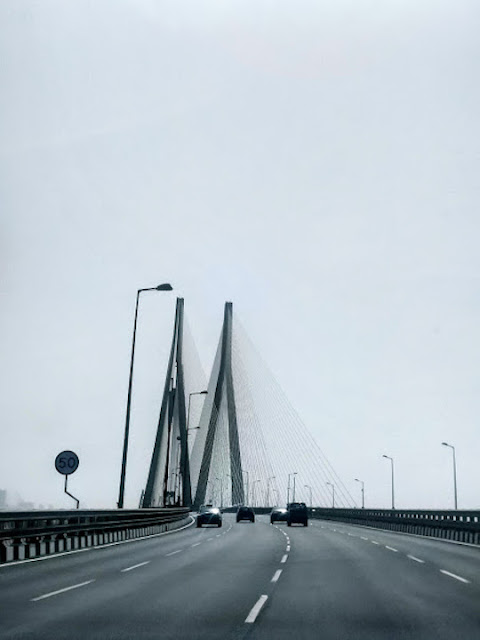 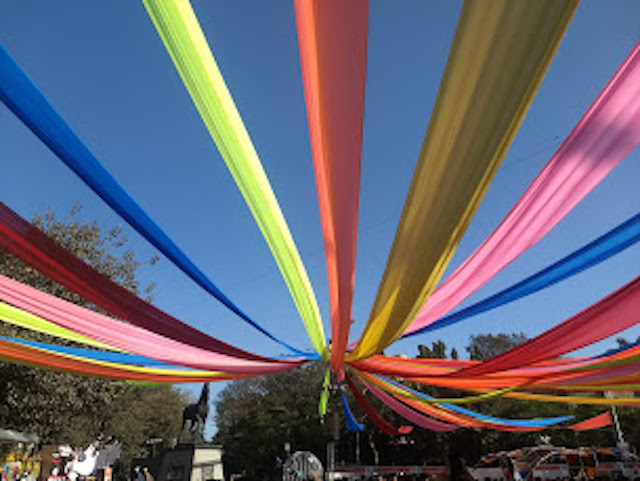 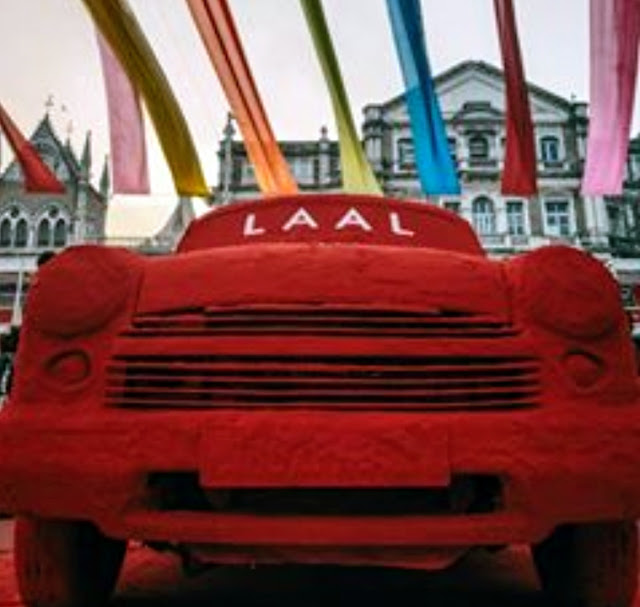 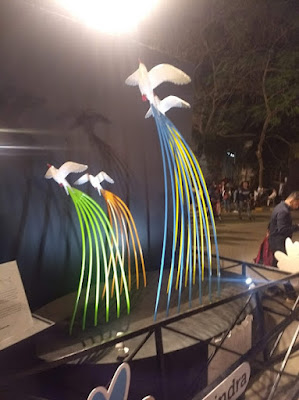 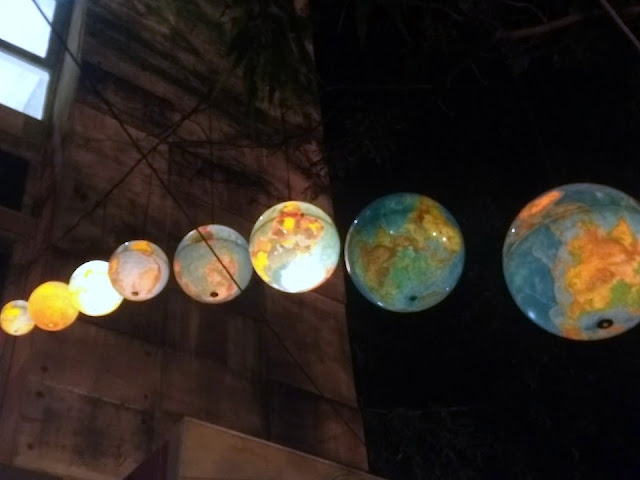 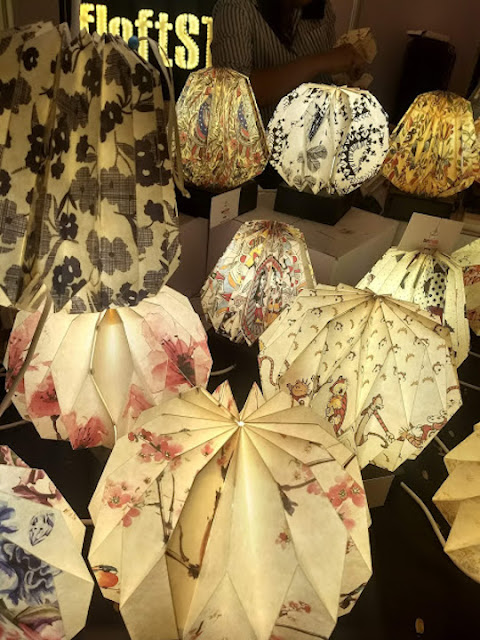 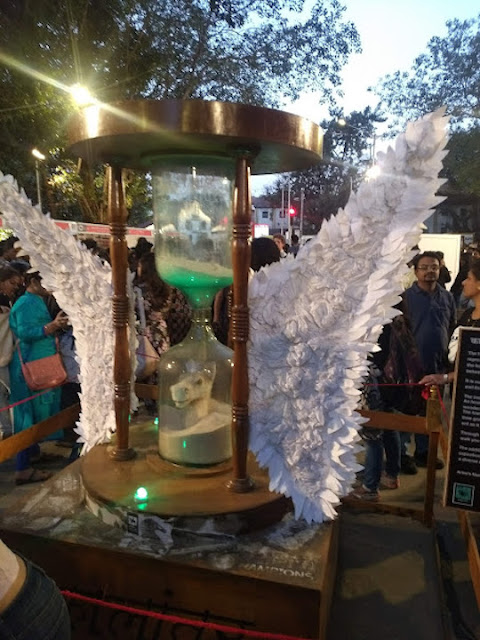 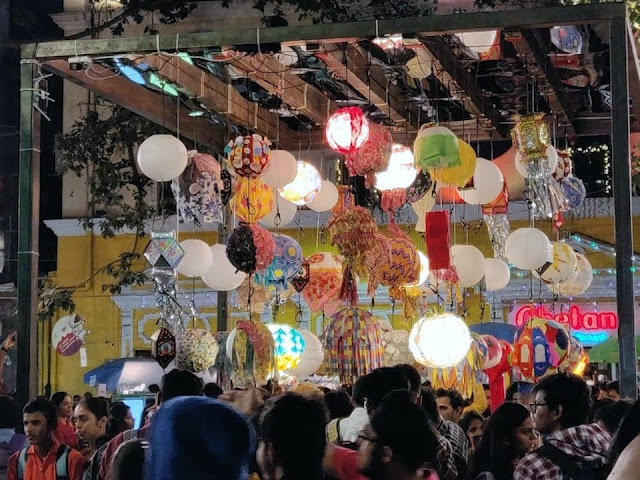 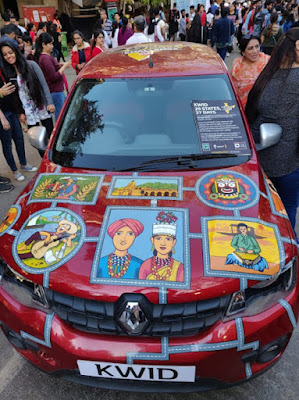 I had heard of the Kala Ghoda Festival in Mumbai few years back and since then been wanting to visit the city around the time. But well, something or the other came in the way until this year.. I planned a short quick trip to Mumbai, just before the festival drew to an end.  Was quite excited and so was my bestie who lives in Mumbai..

This was the 1st time, I told more than one friend I was coming to the city and asked if we could meet. There are a few I know through the online world, we have been in touch for more than just a few years but haven't met yet.. But well, cant have it all right? This time managed to meet two friends and the third one continues to remain an online friend ...

I landed in Mumbai Thursday morning and Friday afternoon we decided to visit the Kala Ghoda festival. Pick up friend's son from his class and off we went.. The ride from Goregaon to Fort area took almost an hour and a half, not including the half hour break we took at Pizza by the bay [lovely place by the way, but that is reserved for another post] ..

Few other friends were also going to be there and was looking forward to bumping into them :D . That apart, another friend who had moved from Chennai wanted to catch up. Not keeping the city's traffic chaos in mind, I told him we could catch up around 7pm or so. Gulp..  [had to message him around 6 saying don't think meet possible that evening... ]

Kala Ghoda Association was formed back in 1998 with the main focus of maintaining and preserving the heritage and art district of South Mumbai. The festival happens around the Kala Ghoda statue [black horse] and streets on either side are cordoned off for stalls and installations, all of which are based around the theme for the year. This year was the 20th year and they were celebrating Mumbai, the city of dreams. So the installations were all about how people come to the city with dreams in their eyes, hope, light, etc...

Was fascinating to walk around, one section was for NGO stalls and the other side was for the general vendors. The stalls change after the 1st 4 days, and then in come new ones.. and then there are talks, workshops that happen across the space, in different venues. As we wandered about, I did meet my friends, chit chatted a little bit before moving on to check out more stalls. Another lady I met , or rather kicked off a conversation with was Uma, who is from chennai and works at the Chinmaya IAS Academy. I initiated a conversation only because I heard her speaking in tamil ... hehe..

It is quite a thing! By the time we decided we were done exploring the place, and paid heed to the hunger pangs, it was 9pm.. We had spent close to 7 hours there, the longest I have ever spent at any festival.. :-) Did pick up a few things from the stalls- cloth bag to buy vegetables [it had 6 smaller pockets inside], jewellery[ friend gifted me 2 neckpieces],some herbs, freshner packets for the cupboard and so on.. I also gave my friend some time alone and helped her son decorate a light [we were given a paper light, got to use glue gun and fabrics/sheets/etc to decorate it- so much fun.. this whole installation was an initiative managed by the Goethe-Institut year on year.] Apart from this, there was a cool set of lights outside the Goethe-Institut that looked like the globe & a few displays within the campus based on science..

Must have walked a few kilometers that evening, but it was fun.. I enjoy interacting with business folks, stall owners and designers.. its a good opportunity to understand their inspirations, background, admire their creativity  & just connect with people. After reuniting with my friend, we decided to do dinner before hitting the road.. We knew it was going to be atleast 2hour ride home, so dinner was thali at Chetana which was located in the same area before getting out to find the car.. :-)

Phew, what a day it had been!!