Skywatch Friday... Going back in time

There we were in the crowded area in Hyderabad, Charminar. After walking around the monument, we spent about half an hour in the Choodi Bazaar [ my friend even convinced me to buy a few pairs of glass bangles, some that wore with the help of moisturiser]. Proud of herself, we walked away from the jam packed alley towards the car park but not before picking up a glass of chai and some boiled peanuts from a street side vendor. She then suggested we visit Chowmahalla Palace, which was nearby. 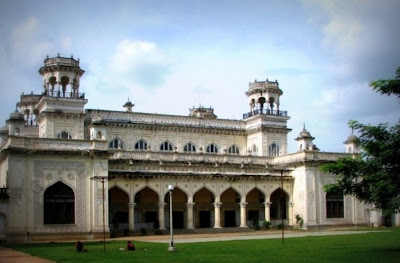 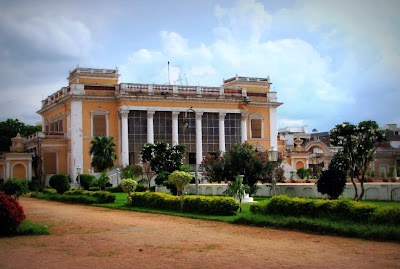 The place looked deserted, we parked her car and made our way to the gate. The watchman said the place was open and we were free to roam. The first step into the gates and all I saw were open spaces, lush gardens, and a huge palace of sorts at the very end of the road. It was almost beyond eye range. We walked towards the side column of buildings and noticed it was a row of rooms that were probably used by either soldiers to stay in or as storage rooms. Most of them were open, but empty. And then there was the garden in the middle with a clean water way. There were also a few fountains, and friend mentioned they turned on the lights and fountains later in the evening. Soon, we spotted a gentleman strolling and went over to say hello. Turns out, he was part of the group that was maintaining the place. He took us under his wing and promptly showed us around the palace. 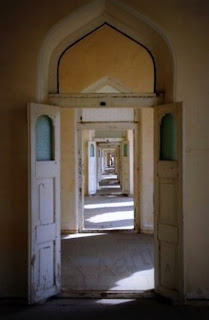 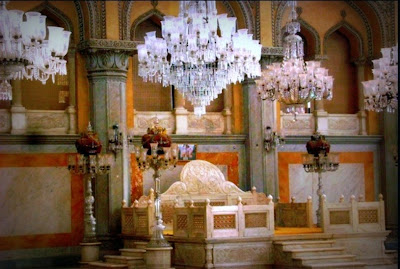 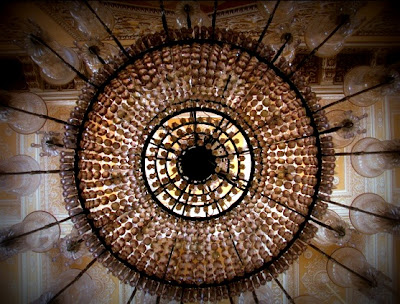 He explained that the palace building in the front was just one of the many. It housed the Durbar hall, a majestic room with a throne flanked by beautiful chandeliers. The lights came on in a few minutes and it looked like we were standing in a room made of gold. Similarly, every corridor, every pillar, every chandelier looked so grand. I was quite curious to know how they were maintained, they looked good as new. He told us they were cleaned regularly, and time to time were polished as well.

The palace also called Chowmahallat (meaning 4 Palaces) belonged to the Nizams of Hyderabad. It was once the seat of Asaf Jahi dynasty and the official home of the Nizam. When I probed on the story behind the name, he went on to explain that in Persian language, Chahar meant 4 while in Arabic Mahalat meant palaces, and therefore the name Chowmahallat or four palaces. As we were walking out of the building, he shared that the palace was once spread across 45acres but today only 14acres belonged to the palace.

Submitting this for Skywatch Friday and for Flower Friday theme by Chennai Bloggers Club [why? the chandelier reminds me of a flower :D]

The title made me smile- why? Cos the post is about going back in time with respect to two things- 1. it is about a place soaked in history and 2. it brought back memories of my hydie visit [which was back in 2006 and since then, every time I plan a trip since then, it has fallen flat on my face]